Please only enable static network configuration if you don't have other means available for auto-configuration (e.g. DHCP). This could be the case, for example, in colocation environments. Manually specified DNS servers can become stale as networks change over time, which in many cases can render the probe dysfunctional.

We therefore recommend not using static configuration unless you have no other option.

As of probe firmware version 4030, we've enabled a feature that allows hosts to define static IP addresses and DNS resolvers for probes. This allows you to install your probe in DHCP-less or IPv6-only networks.

We recommend you read through this entire document before jumping into the procedure.

The basic principles of using static configuration are:

What follows is a detailed description on how you can enable static network configuration.

① You need to plug in your probe and make sure it is online, at this stage using DHCP.

② Make sure your probe has already upgraded to version 4030 (or newer) - see the probe status page to check this. If not, a power-cycle (just unplug the probe from the USB and plug it in again) will likely force the probe to upgrade, although this is not guaranteed, because the probes do not check for new firmwares after each reboot.

③ Login, and go to your probe's status page, switch to the "Network Information" tab, and click the Edit button you see next to the address family you want to statically configure.

④ Set the "Configuration:" field to "Static", and the form will change to allow for new values including Address, Gateway, etc. Make whatever changes are appropriate.

⑤ Make sure the data is correct, this includes having DNS resolver entries matching the protocol version you've defined a static addresses for (i.e. an IPv4 DNS resolver entry if you configure static IPv4), and that these addresses are reachable from your network, otherwise the probe will not be able to resolve names.

⑦ The probe should automatically go down and come back again in 5-20 minutes. It will try to use the given static configuration, but very likely fail (as it is still sitting in the network with DHCP) and fall back to DHCP.

⑧ Once your probe is back online, you can verify that it recorded the static settings by reloading the page and looking at its Configuration pane. There should now be two sub-sections: "Current Configuration" and "Specified Configuration". If the latter has what you expect, and the last line says either "Confirmed" or "Applied", you're ready to move the probe to its new statically configured home. 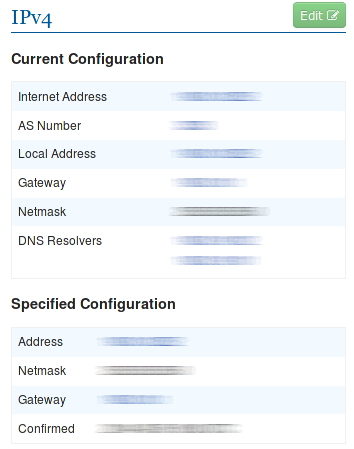 ⑨ At this point, you can unplug your probe and plug it to the statically configured network. It should connect to our infrastructure using the static configuration. You're done.

If your probe does not connect to the target network, then you need to go back to the last step: plug in with DHCP, and check your configuration.

If all looks fine but it just doesn't work, let us know.

If you want to change the static configuration again, we recommend to do it on a network with DHCP, in order to prevent any hiccups.